What was to be an average day of female appearance up-keep turned into an imperceptible downward spiral of moments where I thought really? this is actually happening. After being in Australia for a year, I have gotten one hair cut (one) and that hair cut was at the Aussie equivalent of Hair Cuttery. Therefore, my hair was cut into a box that was sculpted around my face. And for dramatic effect that box hugged tightly on to my cheeks so I looked like I was wearing what seemed to be some sort of fifteenth century permanent helmet. For $35 you cant really complain, the funny thing is here the $35 dollars is just for the cut. No shampoo, no blow dry, no scalp massage,  just cut. So you walk in and a random lady from the back with a limp and perhaps a peg leg emerges and spritzes your head with a water bottle that may or may not be growing its own ecosystem. (I had one woman who would spritz and one woman who would cut, so..that last lady just spritzes-, wtf?) So nearly on cue post spritz, lady numero dos came by to randomly cut the shit out of my hair in a manner I can only describe as un-skilled. Its the weirdest thing ever. “Why, thank you for that face mist and mind fuck, good day to you.” I wouldn’t be doing that again so I decided to find out what else was available in a 2km radius. I went into Toni & Guy to ask them how much a cut would be there, (ya know sussing out the comp., whateves). The lady at the front desk said there were different prices depending on who you get, $75 for just a hairdresser and  $120 for a hairdressing director (WHAT, wtf?) I want a haircut, I don’t want to appear in and produce an short indie film comprised of slow motion hair flips. And what are they cutting your hair with? baby elephant tusks? It’s just ridiculous and quite frankly borderline offensive.

So anyways, I ended up at a place that would neither turn my head into a walking talking faceless helmet nor Rumpelstiltskin my first born for a haircut. In I went feeling easy, breezy and beautiful (hmm…) I was greeted by a short woman (well everyone’s kind of short) who put me in a chair and began the regular benevolent hairdresser chit chat. “How do we feel today?” “Yea, we feel good thanks” “Do we feel like we want to go short?” “I guess…we do.” “Aahhh yes, no. no. no. You color it yourself don’t you?” (I feel like I just got bitch slapped) “Yea, I do” “Yea, see that’s why it looks like this up here” (she just waives her hands  around my whole head) translation: you look like there’s poo-poo on your head. “Ahh yes I see that” After a back and forth of contemplating what the next move should be I finally gave into spending $205 on what I thought would include a whole head transformation, an upper back massage, maybe one of those men that waves you with the over sized fern leaf and a mini-fridge. Unannounced to me it was only the hair-do we (we, I am now officially plural) were paying for. Whatever fine, if its going to make the people in here look at me more like a lady of elegance than a hobo, I’m in. So away they went tin-foiling the shit out of my hair. (Note: when I get this done at home my hairstylist is a small Filipino woman. So, in order to make our relationship work I either have to shrug my shoulders down and slope into the chair so I look engulfed or she would get a box to stand on. (A BOX!). “Yea, I got that tall chick again.” “Oh, right. I”ll just grab the box.” (wtf?) Anyways this wasn’t as bad but I did need to do a little manipulation of the spine.

After I sat for 30 minutes reading about inner self improvement, sex positions, why its good to be single, how to get a boyfriend, how to not to be a slut, how to lose weight and a day in the life of a “rub and tug” sex-worker (girl magazines are ‘effed) I needed to go to the bathroom. I asked my mademoiselle hair technician where it was and she said just around the corner (wha? just around the corner? like outside of this establishment?) I’ll just give you this key and you walk out to the left down the alley way and into the apartment building next door. Ok…this is all fine normally except for the fact that its not. And also at the moment I am wearing a grown-up cape with a dome of aluminum on my head and a towel wrapped around my neck like a cravat. Classic, of course I’ll have to walk around aimlessly like this. Fine, so I took the key and went on my quest for what seemed to be eternal life, not the bathroom. Upon exiting the salon I walked past where I was supposed to turn left and since I was a bit hungry ended up staring through the glass window at a couple eating Thai food. Alright, they’ve spotted me..awkward..eye on the prize please. I’ll just continue on down this way.. whoopdie-doo lala…Finally. I found the alley I was supposed to walk down. Hold up why is this bathroom in Guam? I may or may have not completed half a marathon by the time I found the apartment building. I let myself in with the key she gave me and looked around for anything that resembled a bathroom. Sweet, found it straight ahead down this hallway I unlock the second door (they honestly are guarding this bathroom like its Guantanamo Bay) and in I go. Perfect, its a bathroom for elves. I kid you not the sink was parallel to my knee caps. This sink would be perfect for a knee cap/shin washing, not for hands. I would like to get out of here before the elf people show up and I am forced to enter a world of fables and folklore. Remembering I’m still wearing my adult cape, tin-foil head and towel scarf I whisk out of there as quickly as possible. Some how instead of going straight I went right and now I am in the neighboring furniture store. Everyone looks at me as I pop out of literally nowhere. They look hard. “Hello!” “I’m just from next door, I went to the bathroom…aaahhh..BYE!” After having been in a lengthier version of the Lord of the Rings, I finally make it back to the salon. My stylist asked if I got lost and giggled a bit. No, lost? Me? I just decided to roam the streets in my Wizard of Nazareth costume and go on an impromptu furniture shop.Well, I’ve been gone for the better half of my youth, so yes, I got lost. I coasted back to my chair full of relief to not be cruising around middle earth somewhere. “Lets get this over with shall we, cause I kind of have to pee again.” 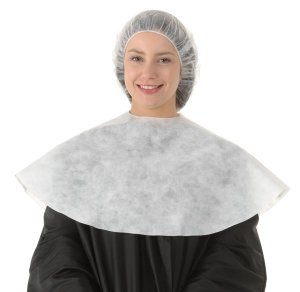 what I kind of looked like except I had tin foil in my hair and not quite as cool.